The 1st Forum of the GMES and Africa has kicked off in the Gabonese capital, Libreville. More than 400 delegates from Africa, Europe and other parts of the world have gathered to discuss new and innovative Earth Observation technologies supporting Africa’s socio-economic development. Organized jointly by the African Union Commission and the government of Gabon, the Forum is the first gathering of all stakeholders involved in the GMES and Africa programme. The programme was jointly launched in 2016 by the African Union and the European Union to strengthen Africa's capacity for the optimal exploitation of Earth Observation systems, data and technologies. 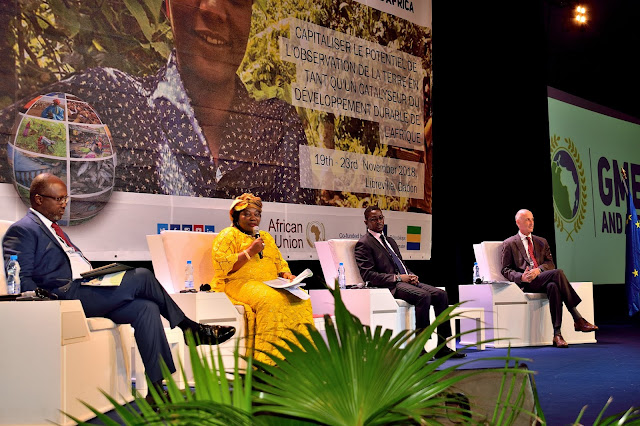 
Africa has significant aptitude to utilize the opportunities provided by Earth Observation, through satellites and other applications that improve environmental management, agricultural productivity, climate change mitigation, food security, health, and disaster risk reduction, among many of its developmental priorities. Limited investments and a fragmented approach has constrained the continent’s ability to mobilize funding, develop local capacities, and provide the necessary infrastructure for a robust Earth Observation industry.

The African Union Commissioner for Human Resources, Science and Technology, H.E Professor Sarah Anyang Agbor said the Forum will evoke the aspirations envisioned by the people of Africa in Agenda 2063 for a prosperous continent with the means to harness its resources to drive its own development on a sustainable basis. She pointed out the pressing imperative for Africa to invest in technological innovation and harness its existing human capital for better health, education and infrastructure systems.

The Head of the European Union delegation to Gabon, Equatorial Guinea, Sao Tomé-et-Principe and CEEAC, H.E. Ambassador Helmut Rudolf KULITZ, stated that "GMES and Africa and its predecessor programmes represent more than 15 years of fruitful cooperation with Africa on Earth Observation and a European contribution of more than €100 million.

The 1st GMES and Africa Forum is centred on the theme “Unlocking the Potential of Earth Observation as a Key Driver of Africa’s Sustainable Development”, a reference to the existing imbalance between the continent’s potential and the actual benefits it derives from Earth Observation dividend. The theme addresses the means of harnessing opportunities offered by Earth Observation to leverage Africa’s socio-economic development.

‘By putting end users at the heart of product and service development, GMES and Africa has become a vision for the sustainable and efficient management of natural resources and security in Africa’, remarked Guy Bertrand Mapangou, Gabon’s Minister of Digital Economy, Communication and Post Office, who is also the government spokesperson.

Forum delegates comprise African end users of Earth Observation services, policy makers, scientists, businesses and academia, who will use the five-day conference to discuss the challenges undermining the growth and expansion of the sector in Africa. They will devise strategies for closer communication, collaboration and engagement among industry experts and users of Earth Observation services. They will further explore the building of stronger partnerships and the deeper involvement of players especially from the private sector and academic institutions.

The Global Monitoring for Environment and Security and Africa (GMES and Africa) is a flagship programme of the African Union under the African Space Policy and Strategy. It prescribes a pathway for the continent to be globally competitive in space activities, including Earth Observation, and to develop a viable continental space programme. With continent-wide coverage, the programme is implemented through grants to African institutions under the banners of regional consortia. 13 consortia representing a total of 72 African institutions have been awarded grants through open competitive bidding to implement projects in water, natural resources, marine and coastal areas management.

GMES and Africa is supported by the European Union through its Pan-African Programme. It is also supported by the European Commission (EC) "COPERNICUS" Earth Monitoring Programme, which provides satellite data and products from the services through the satellite EUMETCAST system of EUMETSAT. Today, more than 300 users in Africa can directly receive Sentinel 3 data and Global Land products. A collaboration arrangement was also signed in June 2018 between the AUC and the EC for Copernicus information and data exchange with Africa. GMES and Africa Programme is another example of the long-standing partnership between the European Union and the African Union.


Information regarding the #1stGMESandAfricaForum  is currently available on dedicated event pages: