The GMES & Africa Programme organized the first information session with potential applicants for its grants in the East Africa region from the 17th 18th of February 2017, at the Hotel Gorilla, in Kigali, Rwanda.


GMES & Africa will be implemented through an open Call for Proposal, using AUC procurement procedures, to institutions that will act as regional outlets on the identified applications.


In order to allow maximum contribution from stakeholders and arrive at the best approach for the Call, AUC has held several rounds of consultations especially with the RECs and RICs based on their experiences with previous initiatives.

The session provided the opportunity to expose the participants to critical information on the Guidelines to ensure that the most competent institutions are adequately aware of procedures for application. It was also an avenue to launch a robust media and publicity campaign for GMES & Africa, with cross-cutting press coverage, interviews and publication.

Message from the European Commission

The session started with a message from the European Commission, conveyed by the TAT leader of the GMES & Africa PMU, who underlined the fact that he was not representing the EC officially. The EC message underscored importance of the project in the context of the Joint Africa-EU Strategy and Roadmap, describing GMES & Africa as truly continental and fundamental to many upcoming milestones underpinning the cooperation between Europe and Africa.


Remarks by IGAD and IOC Representative

The IGAD and IOC representatives spoke of the need for GMES & Africa to be at the forefront of stimulating the participation of African institutions in delivering its mandate, and to inform them adequately about their responsibilities in this process. They described the session as critical to the transparent and effective execution of the Call for Proposals, and underlined the importance of the private sector in driving Earth Observation in Africa.


Statement by the GMES & Africa Coordinator

PRESENTATION BY RECs (IGAD and IOC)

The IGAD representative presented his organization’s mission, structure and focus areas, including agriculture, natural resources and renewable energy. He highlighted IGAD’s main achievements, notably, a Drought Resilience Initiative which is operational, and noted the commitment of the countries involved, who consult one another to address trans-boundary impacts and effects.
In her presentation, the IOC representative gave an overview of the organization, and delved into the regional challenges, among them resource management, erosion, weather and climate, pollution and its management, alien species as well as invasives. She presented IOC’s thematic regional priorities, platforms, networks and instruments, and said the region has capacities but gaps at the national level, including the problem of brain drain and lack of data sharing.

The GMES & Africa Coordinator presented the project’s generic status, describing it as an Earth Observation system designed to respond to global needs to manage the environment, understand and mitigate the effects of climate change and ensure civil security. He gave a brief historical background to the project, in the context of EU-Africa cooperation in space and outlined its thematic areas, plan of action, funding, the 23 applications under the 2 services, as well as their geographic distribution.

The GMES & Africa Coordinator further detailed the governance structure of the project and its framework for capacity development and utilization, stressing the fact that the project’s implementation and decision making will be the exclusive domain of the African Union Commission. He further reminded participants that only the African private sector can apply for grants, and that the RECs and RICs will have a prominent and sustainable role in the implementation of GMES & Africa.

On the communication and visibility component, the GMES & Africa Communications Officer presented the conceptual framework of the project’s Communications Strategy, including the various audiences, media tools, methods, platforms, messages, branding, as well as monitoring and evaluation channels. He made reference to the draft already developed and said the team is currently adapting it to the MESA communications model, in line with the policy to build on existing MESA structures and achievements.

In the ensuing discussions, participants spoke on the need to continually align GMES & Africa’s activities to the aspirations of the AU Agenda 2063, and to other regional and international development priorities. They emphasized the importance of building partnerships between members of regional EO programmes and other EO operatives at the local level. On Communications, participants recommended that lessons be also drawn from the shortcomings of MESA and other predecessor projects, and that GMES & Africa takes a step further to tackle knowledge management and capacity building.

The Principal Scientific Officer at the Department of Human Resources, Science and Technology of the AUC presented the Commission’s Grants Management Manual, beginning with an explanation of the purpose of the manual, the principles of grants management, ethics and obligations for officers, code of ethics and grants management responsibilities of the AUC and its departments, as well as the various methods of grants management. The presentation also touched on the Guidelines for applicants on the Open Call for Proposals, the criteria used in evaluating proposals, how to file applications, and other details pertaining to the application process.

PRESENTATION ON THE GMES & AFRICA GUIDLINES

The GMES & Africa Coordinator presented the Guidelines on the Call for Proposals, and he began with the general, then specific objectives of the Call. On the Guidelines, he said the objective is to provide applicants with relevant information on the GMES & Africa Support Programme, on the priority areas for the Call for Proposals and the expected results/outcomes. The Guidelines will also guide applicants through the rules and the application process to submit their proposals, and provide them with information on the proposals' evaluation process and grid for transparency and guidance.

The Guidelines will further inform applicants on how the results will be communicated and published. The presentation again highlighted the priority areas of the Grants, which will be issued in two lots according to the 2 services: Water & Natural Resources, and Marine and Coastal Areas.

On financial allocations for the Grants which amounts to 17, 500, 000 Euro, the GMES & Africa Coordinator underscored the financial obligations of the contracting authority, the applicants and their partners, as well as the manner in which the Grants will be issued. He emphasized the rules for the Call for Proposals, including the eligibility of applicants, eligible actions, costs, and procedures to follow in applying.

In the discussions that followed the presentation, the AUC team made it clear to concerned participants that the request for RECs to review applications before they reach the AUC will be an aberration of the process set up by the Commission, as well as constitute a possible conflict of interest.

CONCLUSIONS AND RECOMMENDATIONS ON THE WAY FORWARD 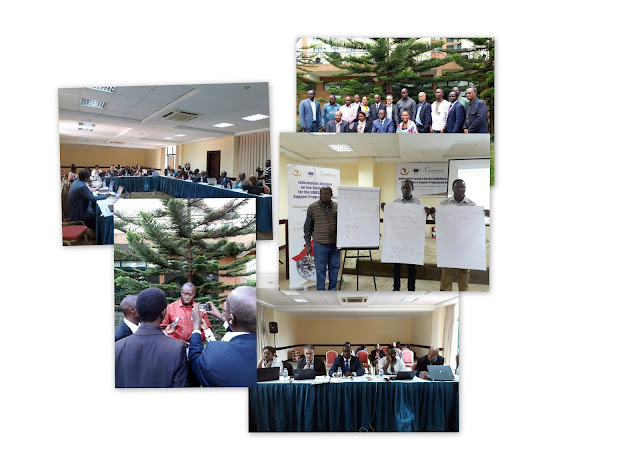