A new Commissioner has been elected for HRST

Her Excellency Sarah Mbi Enow Anyang, from Cameroon, was elected as the new Commissioner for Human Resources, Science and Technology of the African Union Commission. 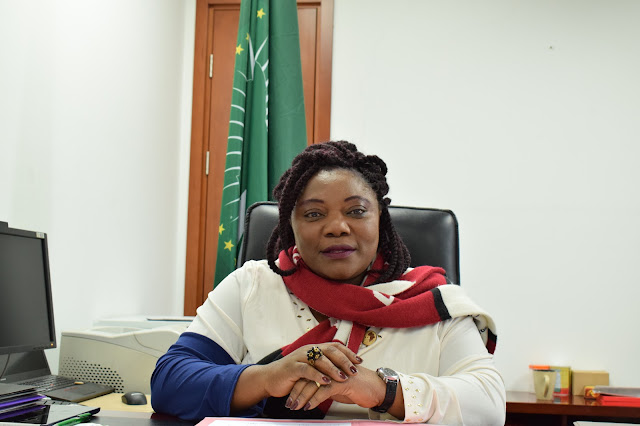 H.E. Anyang has over fifteen (15) years’ experience in the field of Academia. She is a Professor of African and Commonwealth Literature, Department of English. Previously she was the Deputy Vice Chancellor in Charge of Research, Cooperation and Relations with the Business World (DVC-RCB) in the University of Bamenda, North West Region, Cameroon. Commissioner Anyang has written a number of academic Books and Publications to contribute to the Continent.

The Department’s role is to ensure the coordination of AU programmes on human resource development matters. It also has a separate mandate to promote science and technology. The Department encourages and provides technical support to Member States in the implementation of policies and programmes in its fields. Key roles include: promoting research and publication on science and technology; promoting cooperation among Member States on education and training; encouraging youth participation in the integration of the continent; and acting as the Secretariat for the Scientific Council for Africa. The Department has three divisions: Human Resource and Youth Development; Education; and Science and Technology.

The management of the main component of the Support Programme (implementation of the five Programme outputs) is delegated to the AUC/HRST Directorate through a Delegation Agreement. The AUC HRST Director remains responsible for the approval of operational aspects of the G&A support Programme such as annual work plans, budgets, recruitment, etc. HRST Director submits same to the contracting authority for approval together with the annual interim reports and payment requests.

The Coordinator assists the AUC HRST Director in ensuring that implementation is realized per the objectives and conditions of the AUC-EU GMES & Africa Delegation Agreement.