In its 2018-2019 Survey of the State & Health of the European EO Services Industry, EARSC delivers an interesting analysis of Copernicus that was prepared with the support of ESA. 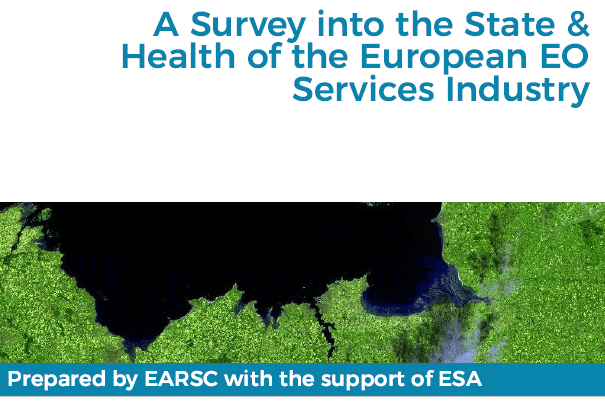 Copernicus continues to be a strong influence on the industrial sector and, with a total budget of €5.8b over the next 7 years (out of a total of €16b for space) linked to an overarching space program approved by the European Parliament last April, the influence will only grow larger.

Among the Copernicus services, companies are most interested in land services, followed by marine and emergency (Figure 20). These results are also broadly inline the results from previous surveys, detecting no significant changes with respect to 2016 data.

In a follow-up interview conducted with selected companies (30 in total) the vast majority of them expressed a positive view of the free, full and open data policy, considered as invaluable cost advantage and business enabler, especially for small businesses and start-ups at the beginning of their activities. The free, full and open data policy, according to a recent study conducted by the European Commission published in April 2019, has been confirmed as the best option (from a legal and technical point of view) to push the ecosystem forward.

Direct contracts with Copernicus – both data sales and services – contribute to around 11% of the total sector’s revenue. Considering the 2018 annual budget dedicated to Copernicus services and in-situ component (€135 million), we obtain that industry is contracted for around 28% of the total value of Copernicus services contracts, showing a positive trend compared to the figures reported in the last survey (20% in 2016). However, the number of companies directly involved in the supply of services appears to have reduced compared to the last 2 surveys. Does this reflect a concentration of supply or is it an artifact of our survey which relies on a sampling methodology? To answer this, we shall plan to conduct a more detailed investigation into this and other points specifically related to Copernicus.

In June 2018, following several years of reclamation by EARSC concerning industrial access to Copernicus data, in June 2018, the DIAS has been launched: five consortia have been awarded contracts by European Space Agency under the authority of the European Commission. The five platforms provide centralized access to Copernicus data and services and processing tools in a cloud-based environment. We are extremely interested in following the extent to which the DIAS will impact the market in future years.

Between 2018 and 2019, EARSC has conducted a parallel study to the industry survey on innovation and entrepreneurship driven or supported by data from the Copernicus Sentinel satellites1.

Based on a survey of 97 individuals conducted during October 2018-April 2019, the study explored the characteristics of Sentinel-based start-ups, their business and revenue models, and entrepreneurial and technological maturity, as well as the challenges standing in the way of Sentinel-based entrepreneurship. The objective was to explore the dynamics of this ecosystem and the possible presence of patterns or trends, deriving a baseline for the number of new companies (i.e. start-ups) making use of Sentinel data.

Sentinels-1 and -2 clearly dominate as far as the choice of datasets is concerned. The main revenue model in use across the sample is subscription fees; the usage fee model is almost exclusively applied by pre-commercial entities. Extrapolating from text comments, consulting sales may also constitute a significant contributor to revenue.

For start-ups, the main challenges are sectoral knowledge, legal support, partnership opportunities and infrastructure, and although access to Sentinel data is not regarded as a challenge by the majority of respondents, access to finance is considered to be the most difficult challenge

The EARSC, the European Association of Remote Sensing Companies is a membership-based non-profit organization which coordinates and promotes activities of European companies engaged in delivering Earth Observation geo-information services. EARSC's key goal is to promote the industry and to help to develop the market for EO services. EARSC is representing EO providers of geo-information services in its broadest sense creating a network between industry, decision-makers and users and covering the full EO value chain from data acquisition through processing, fusion, analysis to final geo-information products and services. EARSC currently has around 130 members and the network contains all the leading European suppliers of EO data and value-added products as well as many small and micro-enterprises.