The kickoff meeting of the Mauritius Oceanography Institute (MOI) led GMES and Africa consortium was held in Mauritius from 14 to 16 August 2019. MOI is the recipient of the African Union GMES and Africa Marine and Coastal Areas Service grant for Eastern Africa coastal states including the South Western Indian Ocean island states. 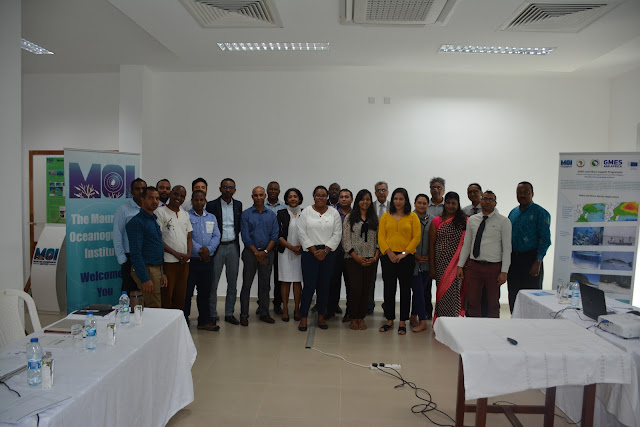 The kick off meeting signifies the beginning of the implementation of the MOI consortium of GMES and Africa, which is a joint African Union-European Union initiative providing information to policymakers, scientists, businesses and the public. The programme is an enabling mechanism designed to support the implementation of the African Space Policy and Strategy in addressing the growing needs of African countries to access and use Earth Observation (EO) data for the implementation of sustainable development policies on the continent. This will impact the management of the environment and natural resources, as well as the monitoring of humanitarian operations through the integration and deployment of African requirements and needs in Copernicus Services.

The participating countries are dependent on their Marine and Coastal resources for their social, economic and ecological value. Fisheries management, better understanding of marine and coastal ecosystems, monitoring and control of illegal fishing, climate change impact monitoring and forecasting of extreme weather events are some of the main regional issues that the project will address.

The GMES and Africa Marine and Coastal Management for East Africa uses both EO and in situ data to generate information; conduct analysis and forecasts that will eventually help institutions and decision/policy makers to observe, understand, anticipate and make better use of marine-related resources. .

The consortium’s eventual objectives include providing fishers with early warning information on the state of the ocean to protect lives at sea, as well as making data available to the scientific community and relevant stakeholders for decision making such as in cases of coral bleaching, harmful Algal Bloom and storm surges, amongst others. It seeks to avail periodic potential fishing zone maps and proposed areas for surveillance patrols and warning bulletins for Harmful Algal Blooms as well as providing vulnerability assessment of the coastlines of selected regions through production of shoreline change maps.

About
The GMES and Africa Support Programme is an Earth Observation programme of the African Union jointly financed with the European Union, and designed to strengthen capacities in Africa for the optimal exploitation and utilisation of Earth Observation systems, data and technologies towards the continent’s sustainable development. Through a grant scheme, the Programme supports 12 African Consortia i.e. 2-3 in each of the AUC African regions, developing EO based applications for natural resources management; see below:

Discover all the GMES and Africa Consortia